My dear son turns 14 today - his dear sister keeps saying "it would be cool if you were turning 12", given that it is 12/12/12, but I wasn't thinking that far ahead when family planning. In fact, he surprised us in a couple of ways and wasn't supposed to show up until after Christmas.

For any Greek Orthodox readers out there, he was also born on his Name Day - the Greeks don't traditionally celebrate a birthday, but have big parties for their Name Day instead. My dear husband and I joke that the only prenuptial agreement we made was any children would be named in the Greek tradition which is to name them after the grandparents, so dear son was going to end up with his name no matter what day he was born.

Looking back, I wonder if my dear mother-in-law fed me something to ensure dear son would be born on his Name Day. We had dinner at her house and ten hours later dear son appeared LOL - although, in fairness we didn't know the gender, so maybe this is all a wild coincidence.

I made a couple of cards a while back and dear daughter snagged my favorite, which I don't think I've shared before since it wasn't made for a challenge. 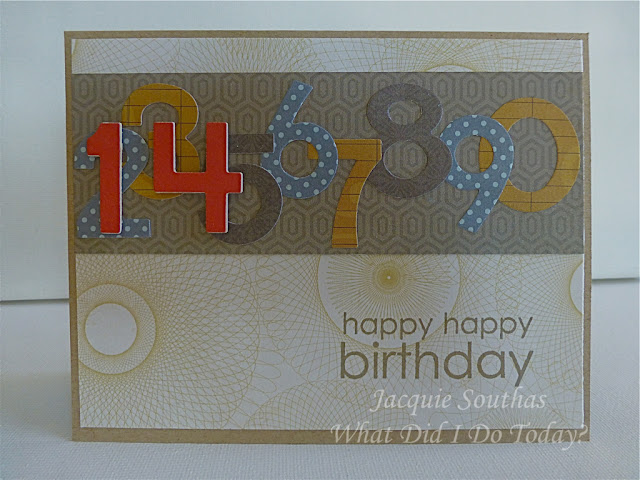 The designer papers are all from the Echo Park Note to Self 6x6 pad and the numbers are die cut using my old Sizzix Block Party Alphabet (it really is an oldie, but goodie). I layered the 1 and 4 and popped them up with foam tape. A Papertrey Ink sentiment is stamped in the corner.

Posted by Jacquie Southas at 8:28 AM